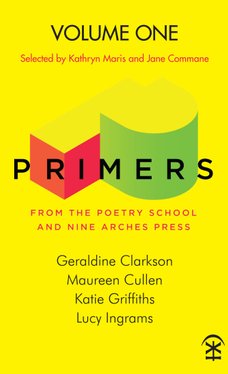 In 2015, The Poetry School and Nine Arches Press launched a nationwide scheme to find exciting new voices in poetry with Kathryn Maris as selecting editor. After reading through hundreds of entries, and narrowing down the choices from longlist to shortlist, four poets  emerged as the clear winners:  Geraldine Clarkson, Lucy Ingrams, Maureen Cullen and Katie Griffiths.

Primers Volume One now collects together these four selected poets. The brilliant chemistry of their poems proves to be a heady mix and a memorable trip – from war correspondents to social work, breath-taking natural landscapes to strange, unsettling dream-like narratives. There’s much here to delight and quietly dazzle, and plenty of evidence of a bright future for contemporary poetry as these striking new voices demonstrate.

Lucy Ingrams has had poems published in various magazines, including Poetry Ireland Review, Ink, Sweat and Tears, Agenda and Magma. In 2015, she won the Manchester Poetry Prize. She is currently studying on the MPhil Creative Writing programme at the University of South Wales. She lives in Oxford.

Katie Griffiths grew up in Ottawa, Canada – the daughter of Northern Irish parents.  She returned to the UK for university and subsequently worked at Radio Times, as volunteers co-ordinator for refugees of the war in the former Yugoslavia, and as teacher at a further education college.  Her collection My Shrink is Pregnant was joint runner-up in the 2014 Poetry School/Pighog Poetry Pamphlet Competition.  She is singer-songwriter in the band A Woman in Goggles.

Geraldine Clarkson’s poems have appeared widely in magazines, most recently in The Poetry Review,  The Rialto and Poetry. She is a former Arvon/Jerwood mentee and winner of the Escalator Prize. In 2015, she won the Poetry London and Ambit competitions, as well as the Ver Poets Prize, the Magma Editors’ Prize, and the Anne Born Prize. Her first pamphlet is forthcoming from Smith/Doorstop in the Laureate’s Choice series.

Maureen Cullen wrote poetry as a teenager, returning to it after a career in social work, inspired by her Open University tutor. She has since obtained a Masters in Creative Writing from Lancaster University (Distinction) where she studied poetry and short stories.

The 52 project started with a simple idea: Write a poem a week. Start now. Keep going. It became a phenomenon. Hundreds of poets took up the challenge and their poems swept the board of poetry prizes, publications and personal successes. This book brings together the 52 prompts written by poet Jo Bell and by guest poets ranging from David Morley to Rachael Boast, so that you can pick up the challenge yourself.