Absence has a weight of its own 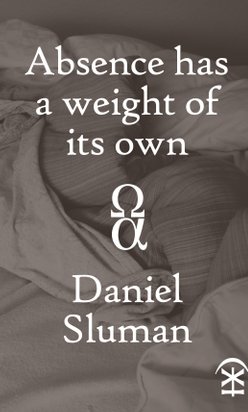 Daniel Sluman’s Absence has a weight of its own is an unflinching study of serious illness, sex, death and decadence. In sometimes brutal and spare cadences, Sluman explores the extremities of human experience in poems that are skilfully, icily primed.

This debut collection is at times provocative and by turns tender and wry. Frailties and vices are held up for inspection in a ruined landscape of disappointing highs,     hung-over regrets and head-on collisions, haunted by figures such as Roman, an unrepentant and debauched womaniser. In the aftermath, real love and hope remain stubbornly, emerging into the sunlight of an unexpected new day.

Praise for Daniel Sluman's Absence has a weight of its own:

"Daniel Sluman has looked mortality square in the eye and given it shape. These poems are crafted with a striking maturity, each with a heartbeat and blood in its veins. If poetry has a purpose, then this is it."

"These are poems of lived experience: of the battles we engage in when we desperately want to live. And there is a deep sense of congruence between Sluman’s experience and the poetry which arises out of that experience. A congruence which, to me, suggests the poems have been hard-won in the truest sense of the phrase; one which possesses them of a deep integrity."                    - Amy McCauley, read the full review here.

"This is a strong and sometimes violently beautiful debut that wears your heart in its mouth as much as it wears its heart on its sleeve. It is also a distinct pleasure to read aloud, its delicate musics blooming sharp as lime on the tongue. Here’s to Sluman’s next book!" - Adam Horovitz, read the full review here.

"This poetry of love and trauma is deeply, generously intelligent without ever becoming knowing. There is no joke here: even the most ambitiously strange analogies are counterweighted by a tonne of hard-won pathos. Daniel Sluman’s imagery is jealous-makingly good and his fiercely witty, lyrical voice charts a course between the plainspoken and the precision engineered epiphany. On any given rainy morning, empty afternoon or night, they turn you sideways. You find yourself possessed like Roman (more Sluman’s sporadically illuminated sidekick than Berryman’s Henry) by the conviction, in the glittering mystery of a mundane street, that 'we’re walking narratives'." – Luke Kennard

"Dan Sluman is a poet accomplished beyond his years. His work demonstrates a maturity and control of image and form which gives his use of the poetic line all the tension of a band-saw. These poems have teeth. They are as brave and uncompromising as their imagery is startling. Not only that but he reads his work with extraordinary confidence and power. He is definitely a young poet to be watched."

"Daniel Sluman is a name to watch for. His poems are sharp and crafted with not a word out of place and he has a talent for the unexpected metaphor and simile which jolts with its fittingness. These are not comfortable poems, they can’t be read – or heard – casually but this is a poet who clearly loves language and has the skill to work it. The one thing I demand from poems I read is that they change me in some way – and these do." – Angela France

"Daniel Sluman's fine thoughtful poems take all sorts of risks that really pay off. He improves upon each re-reading, achieving what I can only describe as a blend of visceral, occasionally sarcastic and humorous realism. I'm convinced that Sluman is a young poet to keep a very close eye on." – David Tait

Daniel Sluman is a young poet based in Gloucestershire. His poems have appeared widely in journals such as Cadaverine, Popshot, Shit Creek Review, & Orbis. He is the poetry editor of Dead Ink, and is on the editorial board for Iota. His debut full-length collection, Absence has a weight of its own, was published  in 2012 through Nine Arches Press.