Midlands-based independent poetry publisher Nine Arches Press, which achieved Arts Council England National Portfolio Organisation status in 2018, will publish eleven new books of poetry in 2020, from a mix of established and emerging poets from across the UK and across the world.

Nine Arches Press will start 2020 with the publication of Letters Home 回家 by Jennifer Wong in February, a captivating and keenly-detailed collection of poems of longing and place. Born and raised in Hong Kong and based in the UK, Jennifer is a writer and translator, and recently published her pamphlet, Diary of a Miu Miu Salesgirl with Bitter Melon Press. This collection will be followed in March by Saffron Jack, a distinctly experimental, satirical and narrative-driven second collection by Rishi Dastidar. A fellow of The Complete Works programme (which aims to promote diversity and quality in British poetry), Rishi has also recently edited The Craft, a book of essays on writing contemporary poetry, also published by Nine Arches Press.

Abegail Morley, shortlisted for The Forward Prize for Best First Collection in 2010 and named as one of the Five British Poets to watch by The Huffington Post in 2017, will publish her latest collection of poems The Unmapped Woman in April – a collection that unflinchingly explores the terrain of grief and bereavement. Geraldine Clarkson will publish her much-anticipated debut collection of poems Monica’s Overcoat of Flesh with Nine Arches Press in May 2020. Geraldine was a Primers: Volume One poet in 2016 and is author of three poetry pamphlets, including a Laureate’s Choice and a Poetry Book Society Pamphlet choice and winner of the Poetry London and Ambit competitions, as well as the Magma Editors’ and Anne Born prizes.

Summer 2020 will feature two further collections from distinctive and exceptional new voices in contemporary poetry. June will see the publication of Little Kings, a debut by renowned Chicago poet and teacher Peter Kahn, founding member of the London poetry collective Malika’s Kitchen and founder of the Spoken Word Education Training Programme at Goldsmiths University of London, and co-editor of The Golden Shovel Anthology:  New Poems Honoring Gwendolyn Brooks. July will also bring the arrival of Magnolia, 木蘭 – a dazzling and deft poetry collection and UK debut by Nina Mingya Powles, a writer, essayist and zinemaker from Aotearoa, New Zealand, currently living in London. Nina is the winner of the inaugural Nan Shepherd Prize for Nature Writing 2019 and was one of three poets to win the inaugural Women Poets’ Prize was launched in 2018 by the Rebecca Swift Foundation.

The autumn will feature haunting, speculative and sharply-observed second collections by Nine Arches poets, including Maskwork, a compelling return by Gregory Leadbetter, author of Coleridge and the Daemonic Imagination (Palgrave Macmillan, 2011), radio dramatist and Professor of Poetry at Birmingham City University who also recently featured on Radio 4’s One to One with Alys Fowler. Also in September, Maria Taylor, a British Cypriot poet, tutor and a Saboteur Award shortlisted reviewer who lives in the Midlands, will follow up her Michael Murphy Memorial Prize shortlisted first collection Melanchrini with a playful and multifaceted new collection, Dressing for the Afterlife.

Acclaimed novelist Rosie Garland will also join the 2020 list in October with her third full collection of poems What Girls Do in the Dark, a book alive with galactic, glimmering energy. Rosie’s award-winning short and long fiction, poems and essays have been widely anthologised and in 2019 she was selected by Val McDermid as one of the 10 most compelling LGBTQI+ writers working in the UK.

Rounding off the year in November is The Oscillations, a magnificent collection by Kate Fox, poet and broadcaster. Kate is based in Northern England and has made two comedy series for Radio 4 and written and performed numerous broadcast poetry commissions on Radio 3’s The Verb and Radio 4’s Saturday Live. She won the Andrew Waterhouse Award for poetry from New Writing North in 2006.

“We’re delighted to be presenting such an exciting list in 2020 – and that Nine Arches Press continues to support rising new voices in poetry and work closely with poets who have been a big part of our own story over the last eleven years. We’re committed to sustaining the platform for many exceptional emerging writers as well as writers who are established and producing some of their most exciting work mid-career. I’m delighted to continue stoking the creative fires with the team here at the press, and thrilled to see how our poets continue to flourish and their books keep on finding their place on readers’ bookshelves – and often, a special place in their hearts and lives too, in the way that only poetry can. In addition, National Portfolio funding from Arts Council England has been vital in allowing us to sustain and broaden our reach to readers and audiences, and we look forward to more adventures in poetry in 2020 and beyond” 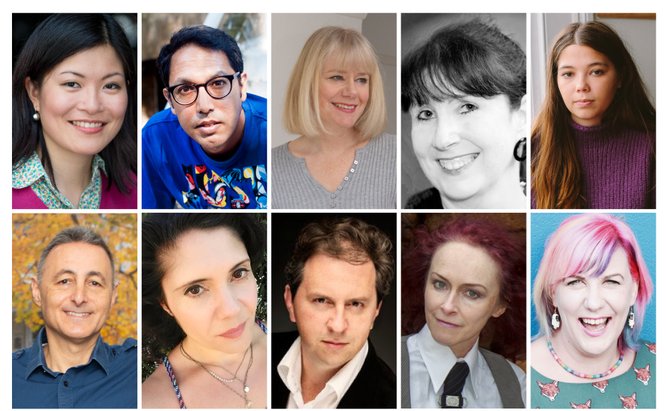 Subscribe and stay up to date with our latest news at Nine Arches Press: